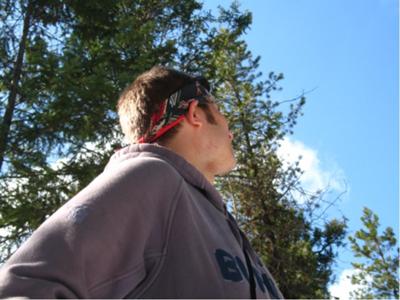 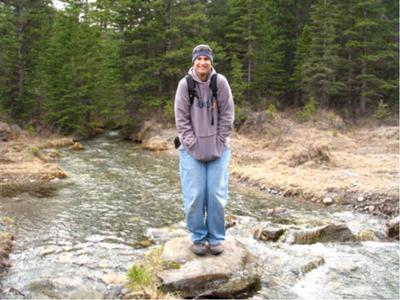 Excited to be Relaxing in the Mountains

Previously I covered my childhood and how the school system just didn't have enough knowledge or expertise. I continue on anyhow into college and relationships without ever knowing what challenges still lay ahead.

I left all that behind when I attended a private Christian high school. Enjoying all the sports trips and camaraderie was a relief and reprieve from how I was treated in junior high. Those were typically successful years until bodily fitness ceased to prove itself.

The school also had a week sanctioned by the Student Council (STUCCO) acting as high school initiation. That week taught me to be brave, not take things personally and take humiliation in stride. It also built my self-worth, value and confidence. High school is a place where toughness and hormones were supposed to be high on the list of contributing factors to that "mask". This was my second breakthrough or SUCCESS #2.

Throughout high school I built upon my computer skills started on in Grade 6 (no internet, 3.5" floppy, and apple computers). High school also built upon the skills with typing/keyboarding and office apps in the context of business. I failed keyboarding with 40-50 wpm and errors. The teacher kept on putting the keyboard box over our hands when failing (equivalent of the dunce cap and corner) and was the Gestapo of keyboarding class. In the next term I upped my typing to 120-150 wpm with spectacular number of errors and reverted to just passing. Miraculously I learnt to type in Grade 11 with 90-110 wpm without any errors or outside help.

To this day my mom doesn't know why it happened but I would surmise that I didn't want that box over my hands and the fact that I was on the computer everyday. It just clicked for me. I never did learn to handwrite as it tired my hand out too much and to this day, print (still tiring esp. note taking presentations). This was SUCCESS #3 and possible breakthrough.

I was still in my world and behind closed doors but at least now in high school I learnt how to make the door translucent. As you may have remembered or read, there was a huge advance and growth in personal computers, software and the internet after the "dotcom" crash of the "90's".

The teen years were rocky, hormone-high, and sexual education was dysfunctional in the 90's, and I gauged it to be more inefficient and deficient for an Aspie. Puberty came early in Gr. 6 and many experiences continued to affect me until my senior year when I was mandated to see a psychiatrist over expulsion.

Up to this point I was labeled "Adolescent Antisocial Personality Disorder" and the behaviour didn't allow my parents to be settled. I even had a police officer within my parent's house at one point and this caused a lot of grief for my mom. I still think their strong as parents to have lived through all these experiences. And I hope they forgive me for any thing that may have been non-intentional.

My personal take is that I may have had APD as well but it was only parts of my personality; and it was only a part of who I was at the time. Concurrently, my medical professionals also tagged me an 'enigma'.

High school graduation and its ensuing events in 2000 (Y2K) were the funnest since high school sports trips. This was fantastic....! Doing it without any supports was a definite huge breakthrough....! It constitutes SUCCESS #4.

I graduated from my first college in 2004 and then graduated with an upgraded diploma in 2006. Graduating from the colleges and with a diploma was a small breakthrough and SUCCESS #5. I say small because I never used my diploma and never capitalized on the oil/gas industry like I should have.

My successes stopped, my work history lingered and became more fragmented as bosses didn't appreciate my skills or how I got work done. So after 7 years of being let go, I had one more chance to prove to myself I could have constant work. I joined the club of entrepreneurs to start my own businesses. At this time during 2007 and 2008 people eventually saw small signs of the market crashing and in mid-2008, a North American wide (if not world wide) economic downturn was declared. As it is in these times working contract or starting your own business is a good idea, as layoffs are frequent.

I worked well at my businesses up until 2009 and, considering that I called them pilot projects, the businesses themselves did extremely well. I returned financial quota just below breaking even. I even took over a friends business and it would be found that the finances checked out. Many clients liked my integrity and how I worked. This is breakthrough and SUCCESS #6. Everything up to this point had been rosy with no trace of struggle since Grade 12 and this is how it reads.

By 2006 after a couple of relationships failed, the failures were automatically internalized. Outwardly nobody would realize the magnitude of those events and how close to suicide I got since grade school. It took me 2 years to get over my first girlfriend. Soon depression slowly, smoothly stepped its way into my life. I didn't know it at first as it was sneaky, until after my mental health breakdown in 2009 and the subsequent reflection.

My door went from transparent in grade school to translucent in middle school and high school. Now my door became opaque. Medical Leave - due to increasingly bad performance in my contract work - was a way for me to retreat from the barrage of life and isolate myself from that which I thought was bringing me down. This later became to be both true and false. An instant correlation of self-employment failure due to interpersonal problems in my contract work, added to the final stack of internalization.

My mental health breakdown and break down of my mind came kinda swift and made my whole life fall apart. Instead of breaking through towards the outside, I broke through the "glass" or shell of superficiality, to the inside. I use superficiality as most of growing up was all about putting on a "mask" so I could fit in with the general population. I sold out; and now I wanted to buy back who I was from society.

Loss #1 had been in Gr. 6 after I realized nobody would listen to my side of the story or what I struggled with. The above was loss #2. Many minor losses would come over the year of 2009 and 2010 including the invalidation from mental health workers and professionals. I hit wall after wall, and repeated the experience of "banging my head" against the system trying to find support.

Again the medical system failed at figuring who I was and how to intervene. I was allowed through a few hospitalizations to reflect on my inner self.

But with reflection on my part, help from the family support worker at my local autism society and a psychologist friend in the autism field I realized I gained a number of successes:

1. Gained membership to my local Autism Society and made myself a name of being a "expert" in the field with my own book list (read 20 books in 3 months in the beginning of 2009).

3. Even though no mental health therapist would help me or look at my case or know how to work with me, I did gain a psychiatrist who I can talk on the same wavelengths with (even though he's not much help in advocation).

4. Obtained recreational agencies, other mental health day programs and support groups to fill in the time during my medical leave and to gain integration back into the community.

5. Obtained waiting status on a life skills group for people with adult Aspergers/Autism.

Despite many not knowing how to support me or manage my problems, a scenario that continues to this day.....

All of the above minor successes still led up to two most important things: a diagnosis of Aspergers in 2010 by my geneticist (hard won SUCCESS #7) and many psychologists in 2009 mentioning how strong I was to continue in such a hostile mental health system - to be bounced around like I had been in past years - and to get past what society was saying about myself (energy draining but bittersweet, SUCCESS #8). SUCCESS #9 I suppose will be the acquisition of government financial aid when it happens but more focus on my self-advocating now is needed, so.....

SUCCESS #10 is the one I am working on currently to keep going, trying to get beyond my thoughts to be the person God called me to be. I have an urge from God to become a motivational speaker - not only to business men and employers about disabilities, but the people I meet on a regular basis (mostly my passion being young people I meet in the hospital wards or elsewhere).

In the words of Nick Vujicic, motivational speaker and sportsman (man born without limbs) "if I reached one person my work has been done". Gaining more self-worth, strength and courage and back my identity from society is part of the process BUT ** influencing and affecting others is the most important **.

And I think I have succeeded so far in telling others about my story - as simple as why I sit before them today. If a person struggling with suicide was sitting in a chair before me, I could say confidently I have broken through the thoughts and broken through societies hold - their assumptions and accusation about who I am - on myself. Then I would share how they can breakthrough the mold to who they are supposed to be. And that God has been my friend that has protected me from the escapes of this world and its darkness.

There you have my "life in a nutshell" (I think of Scrat & his adventures) and the struggles throughout my life. And to think of it, it has seemed I was in a nutshell all my life, until I decided to be my self, break out of societies mold - the mold I was holding to for the sake of the general NT public.

Join in and write your own page! It's easy to do. How? Simply click here to return to Aspergers Syndrome success stories.