Life with Autism - From the Inside 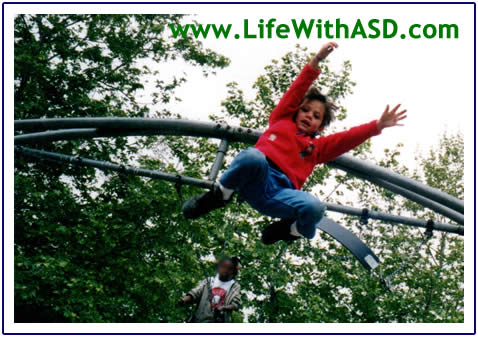 My son Cameron in 2000 when he was just under 6 1/2 years old flying through
the air with the greatest of ease, while I lay in the sand taking the picture. :)

"Every child is gifted. They just unwrap their packages at different times." -- Unknown

Information about the removal of "Asperger's Syndrome", "Pervasive Development Disorder - Not Otherwise Specified (PDD-NOS)", and "Autistic Disorder" from the DSM-V Psychiatric Manual and rolling of it all under "Autism Spectrum Disorders (ASD's)", and the effect it has on this website.

When I started my research (I try to read at least one thing about Asperger's and Autism every single day) I found that there was very little information available.

There were a few websites with "clinical" descriptions and definitions of Asperger's Syndrome but nothing "from the trenches", no personal experiences that I could find that might help me with our own day-to-day.

So I started putting this website together back then. I figured that maybe by doing this (writing about our own experiences) I might be able to help some other parents and caregivers of those on the Autism Spectrum.

Even as recent as today I am still learning the significance of those things, past and present, and even today I still get "hit between the eyes" with things that happen.

Maybe with this website I can spare other parents and caregivers some of the heartache I went through while trying to work with, and help, my son ... and maybe you'll have ideas that have worked for you that might work for me (I'd LOVE to hear any ideas or suggestions anyone has). :)

I'll be doing many things here that I hope will help you...

If you want to read about something that I don't have here, please do not hesitate to contact me.

The Prevalence Of Autism Spectrum Disorders

When I started this website in 2005, when my son was diagnosed with Asperger's Syndrome, I believe the numbers were approximately 1 in 150 children on the spectrum (I don't know that I have that number exactly right).

Then another study in 2012 found that 1 in 88 children (diagnosed prior to 8 years old) is on the spectrum.

How much worse would those numbers truly be if they were to take into account children and adults who were diagnosed after age 8?

Well how about this...

That's not an overall estimate of how many people are on the spectrum, that "1 in 50" is strictly the number of children between the ages of 6 and 17 that were diagnosed in 2011/2012 alone.

Is Your Child Included In The "Count"?

The numbers are kinda scary when you start considering all those who haven't yet been counted so to speak...

I then found an article that stated that the numbers were now 1 in 47 children on the spectrum and then just a couple days after the CDC said 1 in 88, the USAAA sent out a newsletter stating that the Salt Lake Tribune had a front page article that the rate is 1 in 32 children.

Why Such A Rapid Increase In The Numbers?

There is some evidence to show that the ever increasing numbers could be due to the fact that it's being recognized and diagnosed in kids ages 6 to 17 (but especially children 6 to 13) who should have been diagnosed when they were younger.

The greatest increase in numbers was for boys (males are four times more likely to get Autism than girls), and adolescents aged 14 to 17 which, if correct, does fall in line with the statement above about kids now being diagnosed that should have diagnosed years earlier.

I do also personally believe that there are more and more children being born today who will be afflicted by an ASD and those numbers will continue to rise until they figure out what's causing it and slow it down.

Why Do Boys Have A Higher Autism Rate Than Girls?

Several years ago, sometime during the first half of 2009 I believe, researchers found a new gene that they referred to as the "autism-gene" and they named it CACNA1G.

While a large percentage of the population carries the gene, it's a variant of the gene that the boys with autism have.

But they do caution their statements by stating that it isn't the only gene involved, that there are many.

Let's Help Each Other

If you know of special items out there that can help others on the spectrum please tell me so that I can post about it here.

I'm hoping that by including our own experiences and challenges and successes, that you will be able to pick through it and find things that help with your situation. :o)

If you have any questions or comments or need any help with anything please do contact me and I'll do all I can to help, even if you don't have questions but need someone to talk to or unload on.

Have your say about what you just read! Leave me a comment in the box below.


Back to the top of this page: Life With Autism Spectrum Disorders (ASD's)

Asperger's Syndrome Left Out Of The DSM-V

Because of the changes between the DSM-IV and the DSM-V (DSM-5) I'll be changing my website sometime in the (hopefully) near future to be LifeWithASD.com.

As you visit you'll see the site changing in how it looks so please be sure to hit your browser's refresh button every time you visit a webpage here in case I've made a change. :)

If you type LifeWithASD.com into a browser it'll bring you directly here to our website. :)

Even though the specific diagnosis "Asperger's Syndrome" was left out of the DSM-V there will continue to be many references to Asperger's Syndrome here at the website. This is simply because A) so many people identify with the term (including myself), B) the phrase Asperger's is still used very regularly even in news stories, and C) because I started building this website back in 2005 when my son was diagnosed with Asperger's Syndrome.

Please click here to go back to the top of this page. :)